Theater and television actor Jehan Appuhami announced on Monday that he would carry a cross for a three-day walk to presidential offices in Sri Lanka demanding justice for victims of the 2019 Easter bombings that killed nearly 300 Christians.

Appuhami is carrying a life-size cross from Katuwapitiya to Galle Face, the Colombo neighborhood where President Gotabaya Rajapaksa is based, a journey of some 40 kilometers that will put him at the center of a weeks-long ongoing protest demanding Rajapaksa and everyone in his administration resign for not properly administering the country.

“Yes, that would be me,” Appuhami posted on Facebook on Tuesday, sharing a photo of himself dressed as Jesus. He announced that he would leave for Galle Face to demand that the government “reveal the truth about the brutal Easter attack”.

Sri Lanka daily mirror The newspaper published images on Tuesday of Appuhami carrying his cross out of Katuwapitiya.

Seeking justice for the Easter Sunday attacks, Jehan Appuhami will walk from Katuwapitiya to Galle Face with a cross on his back. pic.twitter.com/7dB8C3NsQm

Actor Jehan Appuhami begins the walk from Katuwapitiya to Galle Face with a cross on his back demanding justice for the victims of the Easter Sunday attack. pic.twitter.com/FP90M3Tj4S

Appuhami was reportedly scheduled to arrive on Thursday at the Kochchikade church, one of six targets in the jihadist attacks, and then walk towards Galle Face to meet the protesters. Online footage showed him carrying his cross alongside supportive protesters carrying placards demanding justice for the dead.

Sri Lanka is currently facing the worst economic crisis in its history. The South Asian country has run out of food, medicine, fuel and other basic necessities, resulting in hospitals delaying surgeries, huge (and deadly) lines at gas stations, and the government defaulting on all its loans to use the cash to buy. . food instead. Sri Lanka is a “democratic socialist” nation, so the ability of the private sector to deal with supply issues is quite limited. Multiple administrations of Rajapaksas and political allies have greatly diminished Sri Lanka’s economic independence, joining the Belt and Road Initiative (BRI), an international program of the Chinese Communist Party that offers poor countries predatory loans that result in loss of sovereignty.

Sri Lankans have been organizing protests – including a camp in front of Rajapaksa’s presidential secretariat, now known as the “Occupy Galle Face” – for the past two months demanding that Rajapaksa step down. Protesters are also demanding the ouster of Prime Minister Mahinda Rajapaksa and all other members of the ruling Rajapaksa oligarchy, which at its height boasted up to 40 family members in public office.

In this context, Sri Lanka will observe the third anniversary of the 2019 Islamic State bombings on churches and hotels on 21 April. As the attacks took place on the holiday, however, instead of observing the date, Sri Lankan Christians marked the birthday on Easter Sunday.

Members of a group later identified as National Thowheed Jamath, which had sworn allegiance to the Islamic State, sent suicide bombers into three crowded churches and hotels that served Easter brunch meals — attracting Christians — on Easter morning that year. Authorities documented 269 people dead, many of them young children, and eyewitnesses described suicide bombers detonating towards the back of churches, where the children’s parents tend to stay to ensure a quick exit if the baby becomes agitated.

Sri Lanka is a Buddhist-majority country with significant Christian, Muslim and Hindu minorities. Buddhists responded to the bombing of Christians with attacks by mobs on mosques and the homes and businesses of people known or believed to be Muslims. A Buddhist monk recommended stoning known Muslims to death. 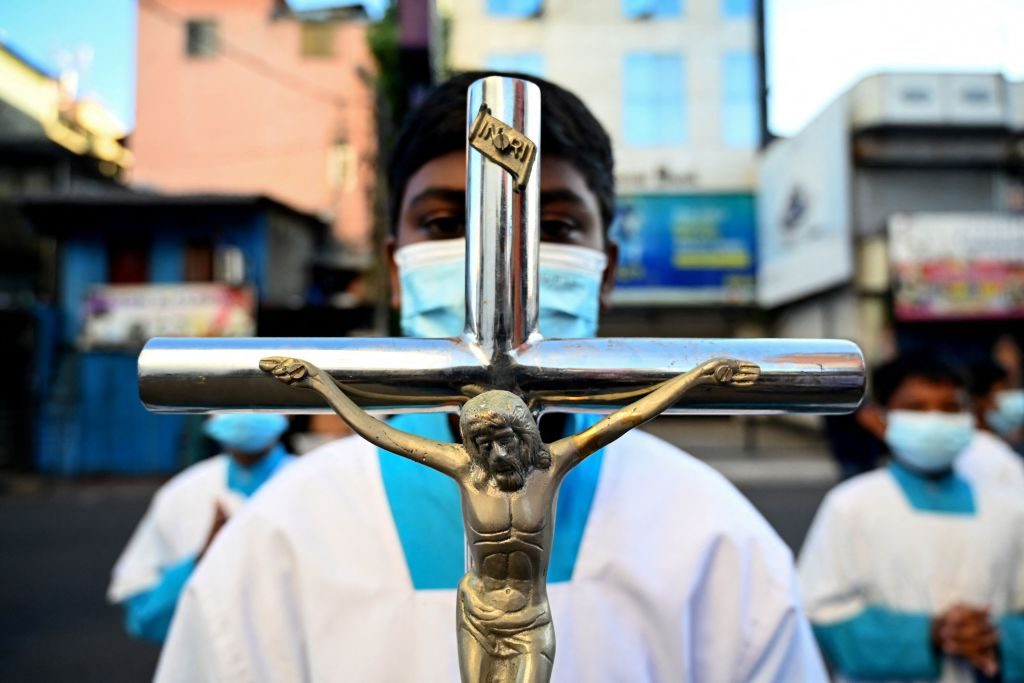 Christian devotees participate in the annual Via Crucis ritual, which symbolizes Jesus Christ’s final journey before he was crucified, during a Good Friday service in Colombo on April 15, 2022. (ISHARA S. KODIKARA/AFP via Getty Images )

Following the attacks, a Sri Lankan intelligence investigation found that then Defense Minister Hemasiri Fernando had received a note from Indian government officials warning that elements of the Islamic State were planning an attack on Sri Lanka, but neither he nor anyone else in the administration. then-President Maithripala Sirisena acted to prevent the attack. Although national disgust at the terrorist acts led to the Rajapaksas fully returning to power (Sirisena tried to force Mahinda Rajapaksa into the prime ministership, triggering a constitutional crisis), those in charge of the government at the time suffered little consequence for the government. bombings happening on your watch.

Dissatisfaction with the national government, while already present under Sirisena, exploded under Gotabaya Rajapaksa. The “Occupy Galle Face” protest is now 11 days old and shows no signs of leaving, demanding the removal of all federal government employees and all Rajapaksas. Accounts of the scene describe a “carnival atmosphere” where people are camping in tents, making food together and flying kites.

The Galle Face protests remained relatively peaceful, but others across the country resulted in government violence. On Tuesday night, police killed at least one person and wounded 24 others as they opened fire on a crowd of protesters in Rambukkana, an inland town, in an attempt to drive them out.

“SSP Police Spokesperson Nihal Thalduwa said the police issued warnings to protesters to leave the area, but they did not comply,” reported Sri Lankan newspaper News 1st, claiming that the protesters were trying to destroy a railway crossing.