Developer Evil Empire shares details about future updates around accessibility options, while hoping to keep the game “tough but fair”.

In a future update, Dead Cells will receive new accessibility features that include the option to auto-hit, continue, and use assist modes. In an interview with Twinifite, developer Evil Empire explained that while the main fun experience in Dead Cells is its “tough but fair experience”, this can “be tricky for some people”, so they plan to introduce some new modes that will cater to the more ways to play.

Continue mode will allow players, instead of restarting after a death, give the more forgivable option of letting you restart from where you died with the same build. The auto-hit mode will also gain this option to continue, a mode that was inspired by the mobile version of Dead Cells. 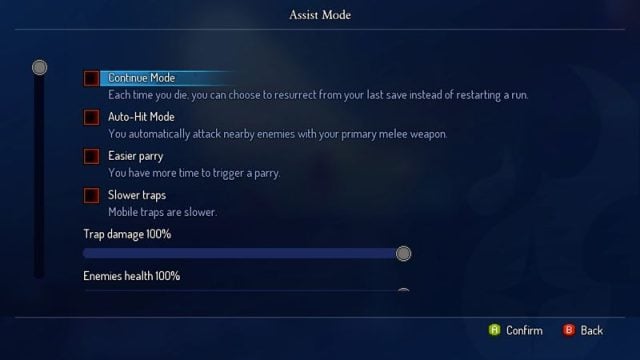 Continue Mode, Auto-Hit and more are coming in an upcoming update for Dead Cells

Other features include the option to rewire the sticks on the gamepad, developer Arthur Decamp explains that they wanted to give players more options as they might not use all the buttons for movement. This means that players can adjust the buttons according to the best way to play. Marketing manager Matthew Houghton also explained that if you prefer to hold a button rather than press the button, that’s an option too. The UI is also being reworked, making the UI bigger, the choice of colors, font sizes and even font type so things can be seen more easily.

These features have been described and more are currently available for testing in the Dead Cells alpha, released early last month:

This update appears to have multiple ways to tweak game settings to suit all types of players, which is great news. I hope these new modes will also attract newer players to try out the game. Dead Cells saw a series of post-launch updates that added some great additions, including downloadable content like The Queen of The Sea and cross-over content with other indie heroes in the free Everyone Here update. Want more metroidvania goodness? Check out our list on the Top 10 Metroidvanias to Play in 2021.

dead cells is available for PC, Playstation 4, Xbox One, Switch, iOS and Android.

For a roundup of recent RPG news, find it here at Top RPG News Of The Week: May 1st (Diablo Immortal, Spellforce 3 Reforced, Honkai Star Rail, and more!)

Sony claims PS Plus update complaints resulted from a bug

A KFC Psyduck toy in China is being scalped