Having women in key roles will help the National Women’s Football League get through one of the most difficult times it has faced, says US World Cup winner Kelley O’Hara.

The NWSL season is picking up where it left off – under a cloud – after more allegations of misconduct by a coach surfaced this week.

Houston Dash announced on Tuesday they suspended coach James Clarkson as part of an investigation into “current and historical complaints of discrimination, harassment and abuse”. Clarkson denied the allegations.

The league, which is starting its 10th season this weekend, has seen several coaches resign or be fired following player complaints.

New NWSL commissioner Jessica Berman said this week that the league is “turning the corner”, with a system now in place for players to raise concerns.

O’Hara, who scored the winning overtime goal for Washington Spirit in the NWSL final last season, says the growing presence of women in senior roles at clubs across the league will help.

The 33-year-old from the United States told BBC World Service’s Newsday: “I think with everything that has happened in the past year – players moving forward, individuals being sacked and held accountable – this was very necessary.

“I don’t want to put it into a men-versus-women thing, but a lot of these teams that had these issues in the league, they were owned and run by men.”

Last year, North Carolina’s Courage sacked English manager Paul Riley over allegations of sexual misconduct made by some of his players when he was in charge of the Portland Thorns in 2015. Riley has denied the allegations.

NWSL commissioner Lisa Baird resigned after the allegations came to light, while FIFA opened an investigation into the case.

The scandals also affected the Washington Spirit, on O’Hara’s side. Former coach Richie Burke was fired following an investigation into allegations of harassment and a toxic work culture. He was initially offered a front office position, but upon completion of the report, the NWSL terminated his contract. Burke has not commented publicly.

Spirit players released an open letter asking owner and chief executive Steve Baldwin to sell the club, which he eventually did to business executive Michele Kang, the first person of color to own a club in the league’s history.

“Having women involved in decision-making roles is so important to this league and I was extremely grateful that our ownership disaster was resolved and Michele Kang is now leading this franchise,” said O’Hara.

“She’s already shown a huge step forward and just an understanding and ability to listen to players and support them as we feel we need to be supported.

“I definitely think having women, and especially women of color, in these roles is immensely important.”

‘Sometimes you want to bang your head against the wall’

Despite all the struggles, the NWSL enters a landmark year – with O’Hara noting its longevity.

‘When I turned pro, I was drafted into the WPS [Women’s Professional Soccer League]“, she said. “That lasted two seasons and it was over. I went a whole year without playing professional football or at least club football.

“This is the longest national league [in the US] survived. It’s been extremely difficult at times and there have been a lot of frustrations. Sometimes you want to bang your head against a wall.

“But I’m so grateful that we’re approaching our 10th season. I’m excited that we’ve laid the groundwork for the league to continue to grow and prosper.”

“You have a houseplant and don’t water it, it will die,” she said. “I think when it comes to the NWSL, football, there has to be equal investment, if not more – because the women’s game hasn’t been around as long as the men’s game.” 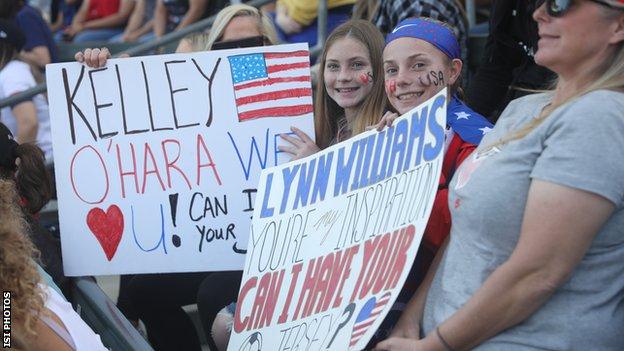 O’Hara has won two World Cup titles with the US and an Olympic gold medal, but feels he still has a lot more to offer the game.

“I still feel like there’s another level I can go to as a player and I also feel like I still have a lot to give in terms of experience and leadership,” she said.

In 2020, she started the Just Women’s Sport podcast, interviewing high-profile sportspeople such as US teammate Alex Morgan and seven-time Olympic gold medalist Allyson Felix. She is also launching a new podcast, the Players’ Pod.

“I think it’s cool to play and have a podcast is that while I’m interviewing or interviewing athletes who play different sports than I do, we have similar and shared experiences,” O’Hara said.

“Even though we haven’t been through the exact same thing, there are many similarities between professional athletes.

“I talk to so many amazing women and it gives me a better perspective on my journey.”

With an NWSL title and a 2023 World Cup to defend, O’Hara knows she can help drive investment in the game by producing on the field and telling women’s stories off it.

“If you’re going to complain about something or get frustrated with an issue, which to me is coverage and visibility of women’s sport, you should be ready to be part of the solution,” she said.

Nets eliminated by the Celtics in the NBA playoffs