The US Commission on International Religious Freedom (USCIRF) urged the State Department to designate India as a “Country of Particular Concern” (CPC) for its “systematic, ongoing and egregious violations” of religious freedom.

In its 2022 report released this week, the USCIRF stated that during the year 2021, “the Indian government has stepped up its promotion and enforcement of policies – including those that advance a Hindu nationalist agenda – that negatively affect Muslims, Christians, Sikhs, Dalits and other religious minorities”.

“The government continued to systematize its ideological vision of a Hindu state at the national and state levels through the use of existing and new laws and structural changes hostile to the country’s religious minorities,” the report continued.

Over the course of the year, the Indian government “quenched critical voices – especially religious minorities and those who denounce and defend them – through harassment, investigation, detention and prosecution under laws such as the Prevention of Illegal Activities Act (UAPA) and the of Sedition,” he declared.

Indian media were quick to denounce the “USCIRF Hates India” report, insisting the document was a propaganda tool aimed at “poisoning India’s ties to the US”.

“Independent observers point to the similarity in the USCIRF’s Indian ‘findings’ to the propaganda spread by groups and individuals known to work for Pakistan,” accused Abhinandan Mishra writing for the Sunday Guardian live. 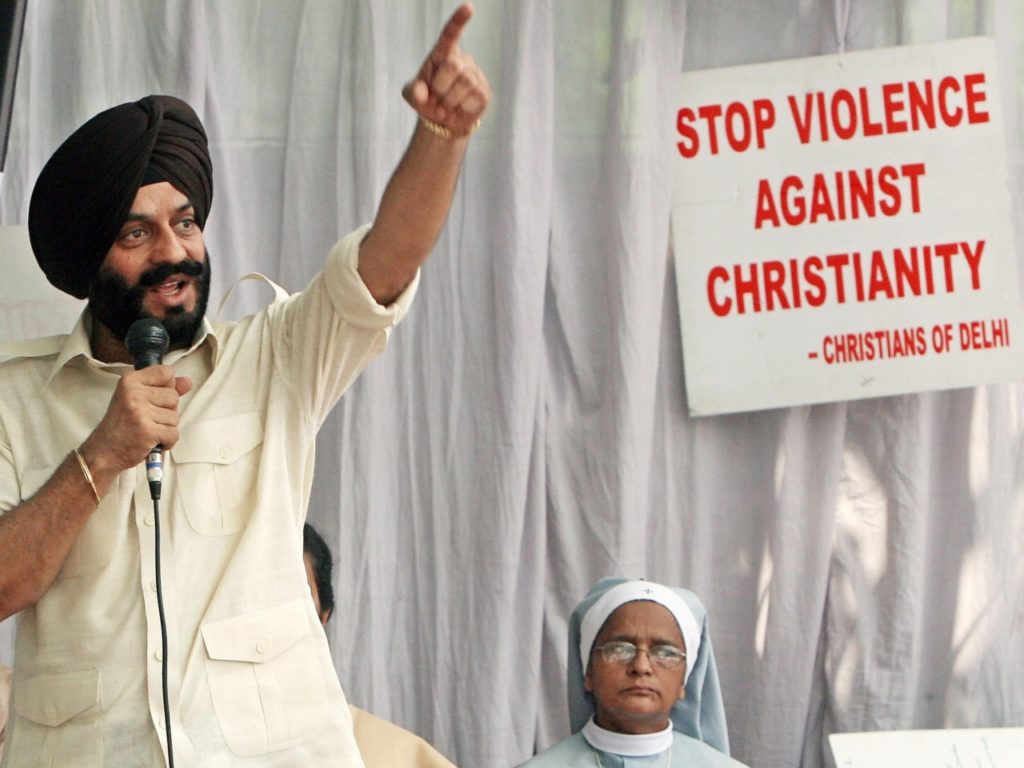 All India Anti-Terrorist Front (AIATF) Archive/President Maninder Singh Bitta (2L) gestures as he expresses his support for Indian Christians during a rally in New Delhi to protest ongoing anti-Christian violence in the southern Indian state of Karnataka and the eastern state of Orissa. (RAVEENDRAN/AFP via Getty Images)

The USCIRF findings “are rarely taken seriously in India because of their ‘biased’ reports and are dismissed by the Indian Ministry of Foreign Affairs (MEA) concisely,” the article states, and its call to place India on the list of CPCs “show how influential the anti-India lobby in the US has become in recent years and the resources being spent to generate anti-India sentiments in Western countries.”

A similar article in world republic claimed that the USCIRF “turned into a tendency to propagate a global anti-India narrative”, while also denouncing a worldwide “anti-India conspiracy” of which the Commission would be a part.

In its 2022 report, the bipartisan USCIRF said that the UAPA and the Sedition Act “were invoked to create a growing climate of intimidation and fear in an effort to silence anyone who speaks out against the government.”

Furthermore, in 2021, “several attacks were made against religious minorities, mainly Muslims and Christians, and their neighborhoods, businesses, homes and houses of worship,” the report stated. “Many of these incidents were violent, unprovoked and/or encouraged or incited by government officials.”

Air pollution cuts life expectancy by 10 years in Delhi, the most polluted city in the world, says study